"These aircraft are also referred to as unmanned aircraft vehicles, remotely piloted aircraft, or drones. They do not carry a pilot aboard, but instead operate on pre-programmed routes or are manually controlled by commands from pilot-operated ground control stations. UASs are being used for law enforcement, national defense, academic research, commercial, and recreational purposes."[5]

Figure 1 shows the components of a UAS. 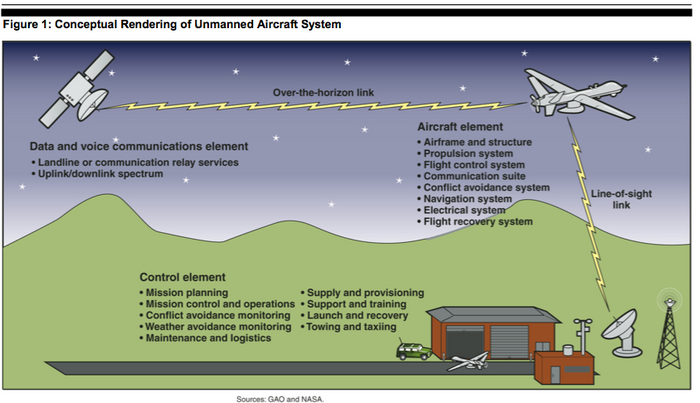 UAS fly at all levels of airspace, generally based on their size. UAS are typically described in terms of weight, endurance, purpose of use, and altitude of operation.

Figure 2 provides examples of UAS and the altitudes at which they operate. Below 18,000 feet, there is a wide variety of types of aircraft, including those taking off and landing, and levels of activity at different altitudes which impacts the integration of UAS into the national airspace system. 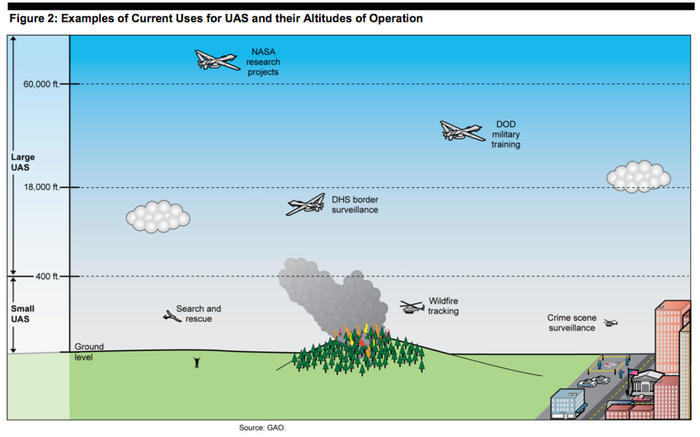 This variety of flight activity will require coordination with various state and federal agencies, e.g., law enforcement, agricultural, environmental, and emergency response. The activity in this airspace is projected to experience significant growth in small independent UAS utilization because of the potential economic benefits for the users of UAS. According to an industry forecast, the market for government and commercial use[7] of UAS is expected to grow, with small UAS having the greatest growth potential.[8]

As noted by the FAA:

"UAS include the data links and other communications systems used to connect the UAS control station, unmanned aircraft, and other elements of the NAS, such as ATM systems and human operators. Unless otherwise specified, UAS are assumed to have no humans on board either as flight crew or as passengers."[10]

Currently, the FAA authorizes military and non-military (academic institutions; federal, state, and local governments including law enforcement entities; and private sector entities) entities to provide UAS operations on a limited basis after conducting a case-by-case safety review. Only federal, state, and local government agencies can apply for and be granted a Certificate of Waiver or Cerificate of Authorization (COA); private sector entities (civil operators) may apply for special airworthiness certificates in the experimental category that allows them to operate UAS.[11]

The FAA has stated that

"In February 2015, the FAA issued a notice of proposed rulemaking as a step toward regulations that will spell out safety rules for nonrecreational UAS under 55 pounds. The notice proposes to limit flights to daylight hours and visual-line-of-sight operations. The FAA also proposes to require a single operator for each drone, which could limit the commercial viability of some potential uses of UAS. The notice also specifies height restrictions, operator certification requirements, optional use of a visual observer, aircraft registration and marking, and operational limits. Final rules may not be issued by FAA until late 2016 or early 2017."[13]

The proliferation of remotely piloted UAS, as they are currently operated, will increase the demand for communications and data acquisition. These systems use communications/data links to connect remotely located pilots, aircraft, and air traffic controllers. Managing the transmission of video and airborne weather radar is key to maximizing available bandwidth. The demand for both of these high-bandwidth systems peaks during the departure and arrival phase of flight. Unmanned aircraft in a fully autonomous mode would greatly reduce the demand for bandwidth associated with aircraft operations. Even so, some UAS missions will involve real-time streaming video and/or sensor data, which could still test the limits of available communications bandwidth. 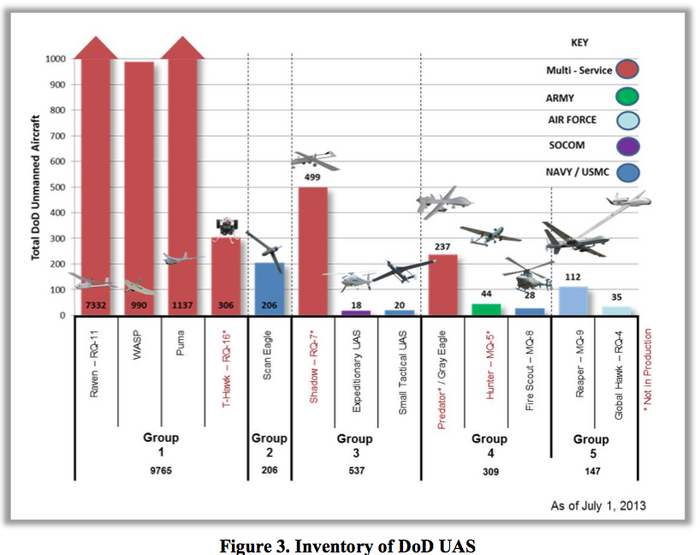 Looking toward the future, modernization of current capabilities will dominate, and limited development of new capabilities will likely focus on smaller numbers of higher end platforms capable of operating in more contested air environments. With fewer new systems in development and many future projects being deferred, the planning outlook toward future systems is much more conservative. See Figure 4. 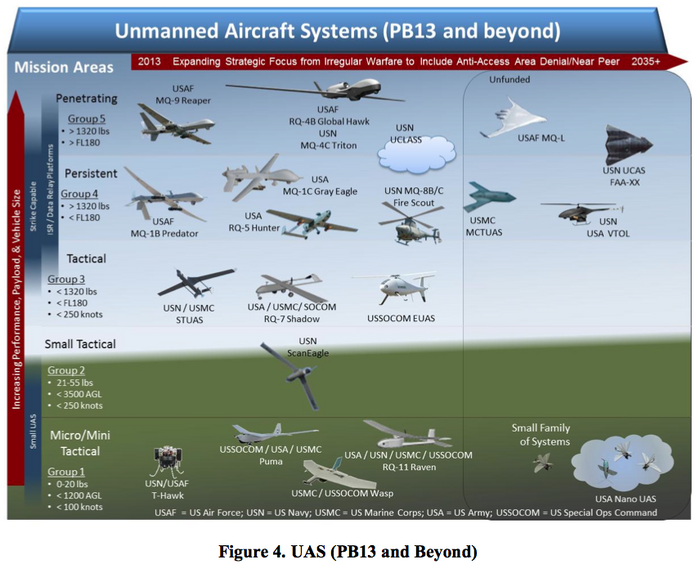