A terrorist watch list is a list of known or suspected terrorists maintained by a government agency.

The FBI and the intelligence community use standards of reasonableness to evaluate individuals for nomination to the consolidated terrorist watch list. In general, individuals who are reasonably suspected of having possible links to terrorism — in addition to individuals with known links — are nominated. Because individuals can be added to the list based on reasonable suspicion, inclusion on the list does not automatically prohibit an individual from, for example, the issuance of a visa or entry into the United States. Rather, when an individual on the list is encountered, agency officials assess the threat the person poses to determine what action to take, if any.

Within the federal community, there is general agreement that the watch list has helped to combat terrorism by (1) providing screening and law enforcement agencies with information to help them respond appropriately during encounters and (2) helping law enforcement and intelligence agencies track individuals on the watch list and collect information about them for use in conducting investigations and in assessing threats.

To decide if a person poses enough of a threat to be placed on the watchlist, agencies are to follow Homeland Security Presidential Directive 6 (HSPD-6, which states that the watchlist is to contain information about individuals

HSPD-24 definitively established the “reasonable suspicion” standard for watchlisting by providing that agencies are to make available to other agencies all biometric information associated with "persons for whom there is an articulable and reasonable basis for suspicion that they pose a threat to national security."[2]

NCTC is to consider information from all available sources and databases to determine if there is a reasonable suspicion of links to terrorism that warrants a nomination, which can involve some level of subjectivity. The guidance on determining reasonable suspicion contains specific examples of the types of terrorism-related conduct that may make an individual appropriate for inclusion on the watchlist.

When an individual makes an airline reservation, arrives at a U.S. port of entry, or applies for a U.S. visa, or is stopped by state or local police within the United States, the frontline screening agency or airline conducts a name-based search of the individual against applicable terrorist watch list records. In general, when the computerized name-matching system of an airline or screening agency generates a “hit” (a potential name match) against a watch list record, the airline or agency is to review each potential match. Any obvious mismatches (negative matches) are to be resolved by the airline or agency, if possible, report on terrorist watch list screening.

However, clearly positive or exact matches and matches that are inconclusive (difficult to verify) generally are to be referred to TSC to confirm whether the individual is a match to the watch list record. TSC is to refer positive and inconclusive matches to the FBI to provide an opportunity for a counterterrorism response. Deciding what action to take, if any, can involve collaboration among the frontline screening agency, the National Counterterrorism Center or other intelligence community members, and the FBI or other investigative agencies. If necessary, a member of an FBI Joint Terrorism Task Force can respond in person to interview and obtain additional information about the person encountered. In other cases, the FBI will rely on the screening agency and other law enforcement agencies — such as U.S. Immigration and Customs Enforcement — to respond and collect information.

Figure 1 presents a general overview of the process used to resolve encounters with individuals on the terrorist watch list. 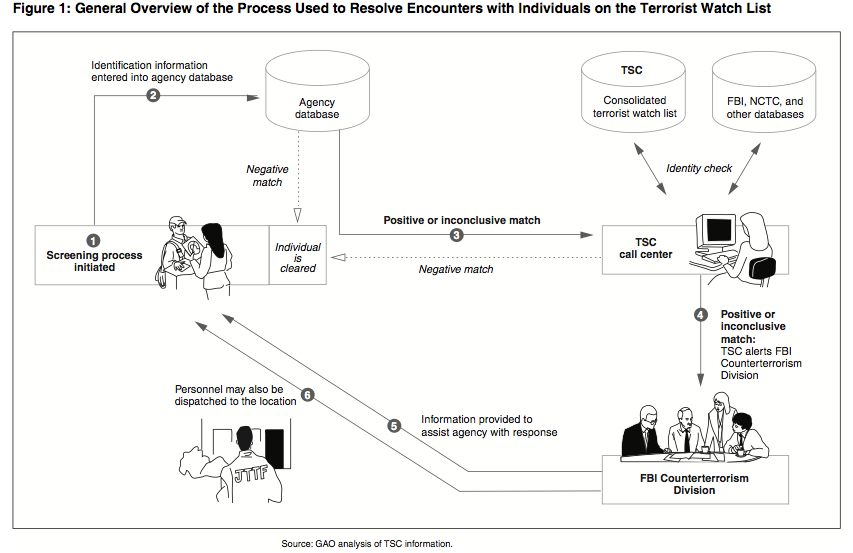