The purpose of spectrum policy, laws, and regulation is to manage a natural resource for the maximum possible benefit of the public. Although radio frequency spectrum is abundant, usable spectrum is limited by the constraints of technology. Spectrum policy therefore entails making decisions about how radio frequencies will be allocated and who will have access to them. Radio frequency spectrum is managed by the Federal Communications Commission (FCC) for commercial and other non-federal uses and by the National Telecommunications and Information Administration (NTIA) for federal government use. International use is facilitated by numerous bilateral and multilateral agreements covering many aspects of usage, including mobile telephony. The International Telecommunication Union (ITU), an agency of the United Nations, is the primary organization for coordinating global telecommunications and spectrum management. 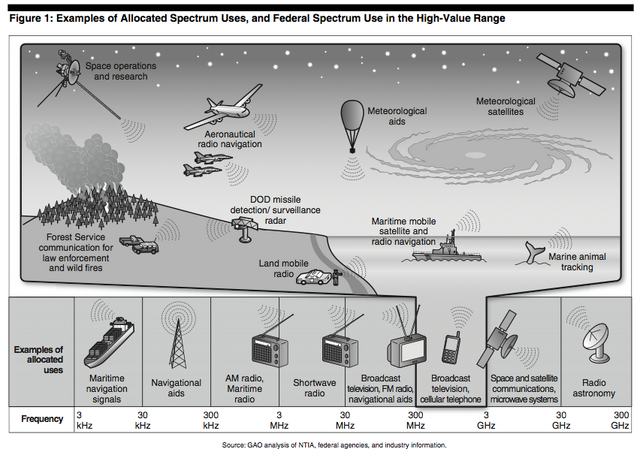 Current spectrum policy relies heavily on auctions to assign spectrum rights through licensing. Economy of scale in wireless communications has become an important determinant in the outcome of these auctions. Companies that have already made substantial investments in infrastructure have been well placed to maximize the value of new spectrum acquisitions. Corporate mergers and acquisitions represent another way to improve scale economies.

Efficiencies through economy of scale have contributed to creating a market for wireless services where four companies — Verizon Wireless LLC, AT&T Inc., Sprint Nextel Corporation, and T-Mobile USA Inc. — had approximately 90% of the customer base of subscribers at the end of 2008.[1] These companies also own significant numbers of spectrum licenses covering major markets nationwide.

Existing policies for allocating and assigning spectrum rights may not be sufficient to meet the future needs of wireless broadband and national broadband policy. A challenge for Congress is to provide decisive policies in an environment where there are many choices but little consensus. In formulating spectrum policy, mainstream viewpoints generally diverge on whether to give priority to market economics or social goals.

Regarding access to spectrum, economic policy looks to harness market forces to allocate spectrum efficiently, with spectrum license auctions as the driver. Social policy favors ensuring wireless access to support a variety of social objectives where economic return is not easily quantified, such as improving education, health services, and public safety. Both approaches can stimulate economic growth and job creation. Choices about the direction of policy, however, can favor some industries over others.

Deciding what weight to give to specific goals and setting priorities to meet those goals pose difficult tasks for federal administrators and regulators and for Congress. Meaningful oversight or legislation may require making choices about what goals will best serve the public interest. Relying on market forces to make those decisions may be the most efficient and effective way to serve the public but, to achieve this, policy makers may need to broaden the concept of what constitutes competition in wireless markets.

The National Broadband Plan (NBP), a report on broadband policy mandated by Congress, has provided descriptions of perceived issues to be addressed by a combination of regulatory changes and the development of new policies at the Federal Communications Commission, with recommendations for legislative actions that Congress might take.

Among the spectrum policy initiatives that have been proposed in Congress are: allocating more spectrum for unlicensed use; auctioning airwaves currently allocated for federal use; and devising new fees on spectrum use, notably those collected by the Federal Communications Commission (FCC). The FCC’s statutory authority to implement these measures is limited. Substantive modifications in spectrum policy would almost surely require congressional action.

The American Recovery and Reinvestment Act of 2009 (ARRA)[2] has provided for grants for investments in infrastructure to improve high-speed access to the Internet. Members of Congress have expressly urged, in a letter to the Federal Communications Commission, that "spectrum allocation, assignment, and use" be considered as part of a national broadband plan mandated by the ARRA.[3]