The Smart Grid Interoperability Panel (SGIP) is a public-private partnership — initiated by NIST in November 2009 — to carry out a variety of tasks related to the development of a smart grid framework for interoperability and cybersecurity standards. It plays a leadership role in facilitating and developing the national policy for the transformation of the power system to the Smart Grid. The SGIP consists of more than 750 participants worldwide from the private sector (including utilities, vendors, and service providers), academia, regulatory organizations, state and local government, and U.S. federal agencies.

The SGIP became a membership-supported organization in January 2013. The Smart Grid Interoperability Panel–Cyber Security Working Group (CSWG) was renamed the Smart Grid Cybersecurity Committee (SGCC), and continues to be led by a NIST representative in support of responsibilities identified in the Energy Independence and Security Act of 2007.

The SGIP does not develop interoperability standards. Rather, it provides an open process for stakeholders to interact with the National Institute of Standards and Technology (NIST) in the ongoing coordination, acceleration, and harmonization of new and emerging standards for the Smart Grid. It also reviews use cases, identifies requirements and architectural reference models, coordinates and accelerates Smart Grid testing and certification, and proposes action plans for achieving these objectives.

The SGIP identifies and addresses standardization priorities. The starting point for this activity is the NIST Framework and Roadmap for Smart Grid Interoperability Standards, Release 1.0, which was issued in January 2010. The report contains an initial list of standards, a preliminary cyber security strategy and other elements of a framework. 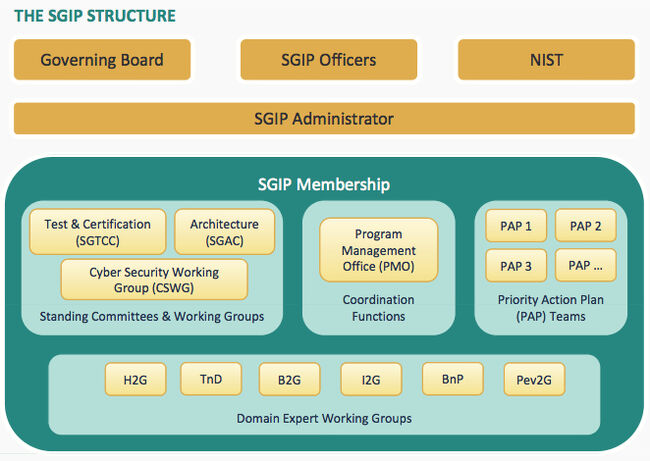 The SGIP is guided by a Governing Board, elected by the participating member organizations. The Governing Board approves work programs for the SGIP to efficiently carry out its work, prioritizes objectives, and arranges for the necessary resources. The Governing Board's responsibilities include facilitating a dialogue with SDOs and other Smart Grid-related organizations including utilities, equipment manufacturers, consumers, government agencies, and regulators as well as others, to ensure that the action plans can be implemented. The members comprise representatives from the 22 stakeholder groups plus 3 at-large members and maintain a broad perspective of the NIST Interoperability Framework and support NIST.

The SGIP has several priority‐specific committees and working groups.