The IT Law Wiki
Register
Don't have an account?
Sign In
Advertisement
in: Technology, Electric, Definition, Smart grid

In the United States and many other countries, modernization of the electric power grid is central to national efforts to increase energy efficiency, transition to renewable energy sources, reduce greenhouse gas emissions, and build a sustainable economy that ensures prosperity for current and future generations. Around the world, billions of dollars are being spent to build a smart electric power grid, referred to as the Smart Grid.

While the terminology varies from country to country, all notions of an advanced power grid for the 21st Century hinge on adding and integrating many varieties of digital computing and communications technologies and services with the power-delivery infrastructure.

"Smart grid stores, transports and manages energy. Smart grid is a de facto Critical Infrastructure as energy is important for the well-functioning of the society and economy. Being the blending of the energy and telecommunication critical infrastructures, smart grids should operate securely and by respecting end users' privacy. Moreover, the protection of the smart grid is the key to energy availability."[2]

Communications technology that enables the bidirectional flow of information throughout the infrastructure is at the core of these Smart Grid improvements, which rely upon collated energy usage data provided by smart meters, sensors, computer systems, and many other devices to derive understandable and actionable information for consumers and utilities.

The Smart Grid is a/an 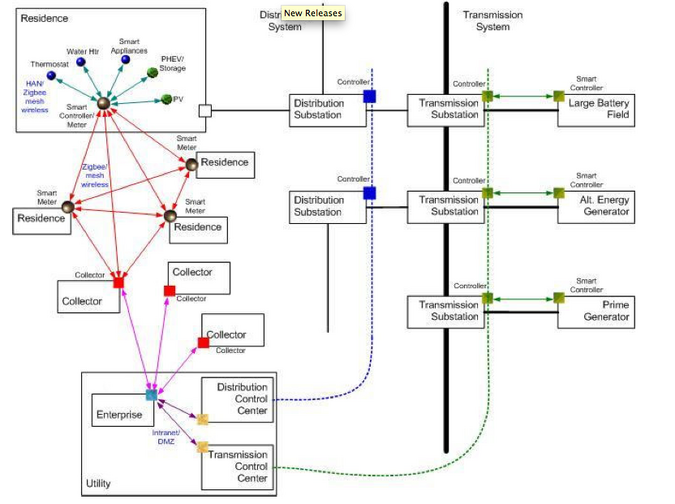 A smart grid is

As described in the 2009 Smart Grid System Report[9] from the U.S. Department of Energy:

In the United States, "[t]he Department of Energy (DOE) is the lead federal agency with responsibility for the Smart Grid. Under the American Recovery and Reinvestment Act (ARRA), DOE has sponsored cost-shared Smart Grid investment grants, demonstration projects, and other R&D efforts. The Federal Energy Regulatory Commission (FERC) is tasked with initiating rulemakings for adoption of Smart Grid standards as necessary to ensure functionality and interoperability when it determines that the standards identified in the NIST framework development efforts have sufficient consensus."[11]

Characteristics of the Smart Grid[]

Under the Energy Independence and Security Act of 2007 (EISA),[12] the creation of a Smart Grid is a national policy.[13] Distinguishing characteristics of the Smart Grid, as cited in the Act include: 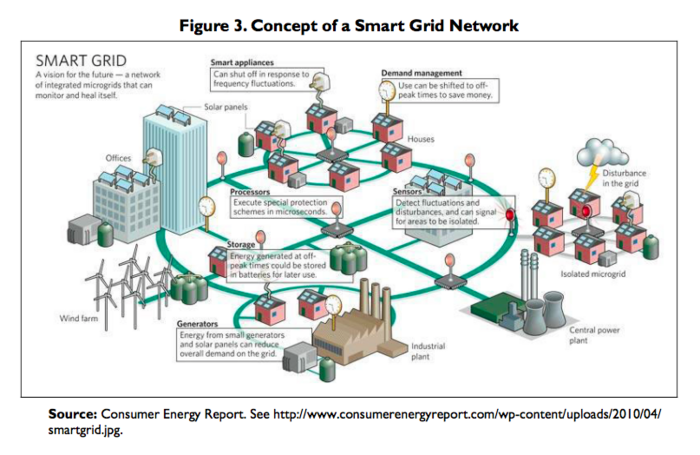 The Department of Energy has stated:

To monitor and assess progress of deployments in the United States, the Department of Energy is tracking activities grouped under six chief characteristics of the envisioned Smart Grid:[15]

Interoperability and cyber security standards will underpin component, system-level, and network-wide performances in each of these six important areas.

The framework described in the EISA reflect several important characteristics. They include:[16]

What the Smart Grid is not[]

Devices such as wind turbines, plug-in hybrid electric vehicles and solar arrays are not part of the Smart Grid. Rather, the Smart Grid encompasses the technology that enables the electric industry to integrate, interface with and intelligently control these innovations and others. The ultimate success of the Smart Grid depends on the effectiveness of these devices in attracting and motivating large numbers of consumers.

One key element of the new Smart Grid is the installation of a completely new two-way communication network between the energy suppliers and their customers. This communication network will be constructed to enable new energy concepts such as real-time pricing, load shedding, consumption management, cost savings from peak load reduction, cost savings from energy efficiency, integration of plug-in hybrid electric vehicles for grid energy storage, and the integration of distributed generation such as photovoltaic systems and wind turbines.

These types of communication networks are all currently operating in the nation's electric grid, but are not yet implemented to the extent that will be required for enabling the Smart Grid.

An efficient Smart Grid requires spectrum capacity to support the broadband communications infrastructure required to operate the grid. A Smart Grid policy that presumes the availability of suitable spectrum for wireless connections could fall short of its intended goal unless spectrum policy is aligned. The Utilities Telecom Council (UTC) has published a report that argues for shared access to 30 MHz of spectrum at 1800-1830 MHz to meet wireless communication needs.[17] This band is currently allocated to federal users. 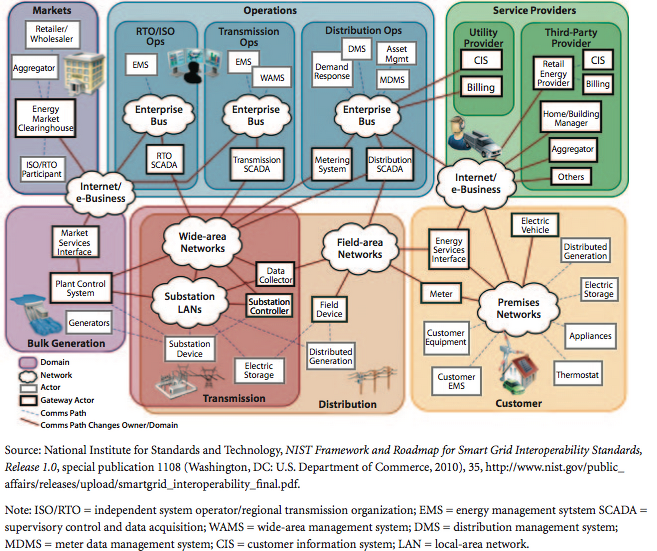 Canada is in the process of a rule-making procedure that would make the 1800-1830 MHz band available for “electrical infrastructure;”[18] operating smart grids on compatible frequencies would facilitate cross-border management of power sources.

Reportedly, the FCC will include recommendations for Smart Grid development as part of the National Broadband Plan. Recommendations could include ways for utilities to share federal spectrum bands.[19].

"Despite the considerable benefits of the future grid, many aspects of the smart grid have cybersecurity risks that need to be considered to ensure a safe, effective grid transformation. The modern grid should be safe, reliable and resilient. A resilient grid has to be able to withstand not just hazards, human errors, hardware failure, and software bugs, but also cyber events as well."[21]

In its broadest sense, cyber security for the power industry covers all issues involving automation and communications that affect the operation of electric power systems and the functioning of the utilities that manage them and the business processes that support the customer base. In the power industry, the focus has been on implementing equipment that can improve power system reliability.

The operation and control of the current power grid depends on a complex network of computers, software, and communication technologies that, if compromised by an intelligent adversary, have the potential to cause great damage, including extended power outages and destruction of electrical equipment. A cyber attack has the unique attribute that it can be launched through the public network from a remote location anywhere in the world and coordinated to attack many locations simultaneously. Efforts by the energy sector to uncover system vulnerabilities and develop effective countermeasures so far have prevented serious damage.

With the Smart Grid’s transformation of the electric system to a two-way flow of electricity and information, the information technology (IT) and telecommunications infrastructures have become critical to the energy sector infrastructure. Therefore, the management and protection of systems and components of these infrastructures must also be addressed by an increasingly diverse energy sector. To achieve this requires that security be designed in at the architectural level.

Risks to the grid include:

In addition, the Smart Grid has additional vulnerabilities due to its complexity, large number of stakeholders, and highly time-sensitive operational requirements.

Under the Energy Independence and Security Act of 2007 (EISA), NIST and FERC were to take the following actions:

"The critical role of standards for the Smart Grid is spelled out in EISA and in the June 2011 NSTC report A Policy Framework for the 21st Century Grid: Enabling Our Secure Energy Future, which advocates the development and adoption of standards to ensure that today's investments in the Smart Grid remain valuable in the future; to catalyze innovations; to support consumer choice; to create economies of scale to reduce costs; to highlight best practices; and to open global markets for Smart Grid devices and systems."[25]