Although radio frequency spectrum is abundant, usable spectrum is limited by the constraints of technology. Spectrum policy therefore entails making decisions about how radio frequencies will be allocated and who will have access to them. "For the purposes of cellular communications, the RF spectrum is generally split into three categories: low-band (under 1 GHz), mid-band (from about 1 GHz to about 6 GHz), and high-band (between 24 GHz and 100 GHz). 4G mobile wireless networks use RF in the low- and mid-band, from 600 MHz to 3.5 GHz, while 5G will expand to higher frequencies. High-band frequencies are referred to as millimeter wave. Figure 2 shows the parts of the electromagnetic spectrum typically used by various technologies, including the RF spectrum available and planned for 5G devices."[3]

Radio frequency spectrum is typically government-regulated in most developed countries and in some cases sold or licensed to operators of private radio transmission systems. (e.g., cellular telephone operators or broadcast television stations). The range of allocated frequencies are often referred to by the provisioned use (e.g., cellular telephone spectrum or broadcast television spectrum). 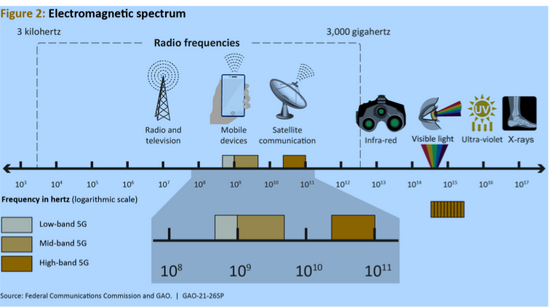 The RF spectrum used in cellular communications has not been definitively linked to cancer or other health outcomes, according to FCC and FDA. The lower frequencies of the radio frequency spectrum that are used for wireless communication, including 5G communication, are considered "nonionizing radiation" because these frequencies lack sufficient energy to remove electrons from atoms and molecules. In contrast, X-rays are considered "ionizing" radiation, which can have significant human health effects and are known to increase the risk of cancer. The radio frequencies used by cellular communications systems can lead to tissue heating, but is not thought to emit enough RF energy to cause harmful heating.

In the United States, the radio frequency spectrum is managed by the Federal Communications Commission (FCC) for commercial and other non-federal uses and by the National Telecommunications and Information Administration (NTIA) for federal government use.

Policy tools that might be used to increase the availability of radio frequency spectrum for wireless broadband include allocating additional spectrum, reassigning spectrum to new users, requiring that wireless network infrastructure be shared, pooling radio frequency channels, moving to more spectrum-efficient technologies, and changing the cost structure of spectrum access.

Although radio frequency spectrum is abundant, usable spectrum is currently limited by the constraints of applied technology. Spectrum policy therefore requires making decisions about how radio frequencies will be allocated and who will have access to them. Spectrum policy also entails encouraging innovation in wireless technologies and their applications. Arguably, the role of technology policy in crafting spectrum policy has increased with the need to reduce or eliminate capacity constraints that may deter the expansion of broadband mobile services.

International use is facilitated by numerous bilateral and multilateral agreements covering many aspects of usage, including mobile telephony.[5]