The statutory definition of organized crime stems from the Omnibus Crime Control and Safe Streets Act of 1968, as amended. Current law defines "organized crime" as

Though organized crime has arguably always been transnational, it was not until the 1990s, following the Cold War and the spread of globalization, that the transnational nature of organized crime surged and criminals expanded their operations across increasingly open borders.

Organized crime in the United States has a long-standing history. Although this history has its origins prior to the 20th century, organized crime flourished around the time of Prohibition[2] and grabbed the attention of policymakers. Through most of the 20th century, U. S. law enforcement combated what most consider “traditional” organized crime networks operating inside the United States, including the Italian Mafia, Russian Mafia, Japanese Yakuza, and Chinese Tongs. 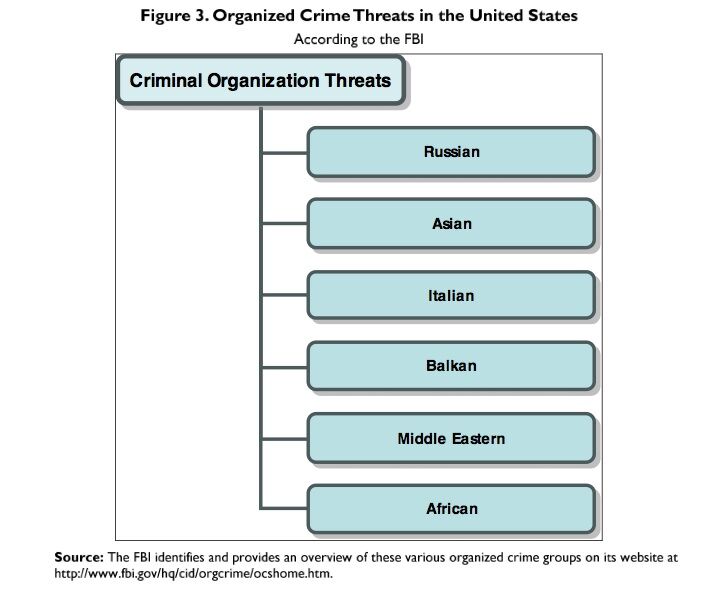 These criminal organizations were involved in a variety of illegal activities, and in the 1950s and 1960s, the most profitable of these activities was gambling, followed by loan sharking, narcotics trafficking, extortion, prostitution, bootlegging, and fraud.[3] Other prominent activities of organized crime groups were racketeering, theft, murder, and money laundering.

This 1967 Task Force reported that law enforcement measures to curb organized crime had not been successful[4] and, further, that organized crime in America was on the rise.[5] Statistics showed that from 1961 to 1966, the number of individuals indicted by the Organized Crime and Racketeering Section (OCRS) of the Department of Justice (DOJ) rose from 121 to 1,198. Further, the number of those indicted individuals actually convicted rose from 73 to 477.[6] Although the raw number of indictments and convictions rose between 1961 and 1966, the proportion of individuals from organized crime groups who were convicted during this period actually declined, from 60.3% to 39.8%.

Congress has enacted a number of laws intended to deal with organized crime, including:

Combating organized crime is not a task handled by one federal agency or even one department. Many agencies have a hand in tackling the threats posed by organized crime. The Department of Justice, specifically the U.S. Attorney General’s Organized Crime Council, is responsible for creating domestic organized crime policy. The Council is chaired by the Deputy Attorney General and has representatives from the Federal Bureau of Investigation (FBI); the U.S. Drug Enforcement Administration (DEA); the Bureau of Alcohol, Tobacco, Firearms and Explosives (ATF); the U.S. Immigration and Customs Enforcement (ICE); the U.S. Secret Service; the Internal Revenue Service (IRS); the U.S. Postal Inspection Service; Diplomatic Security; and the U.S. Department of Labor, Office of the Inspector General.

Organized crime is increasingly using the Internet to exploit any online opportunity to make money through such activities as information and identity theft, fraud, extortion, illegal gambling, pornography, and other activities. Organized criminal elements are generally more structured and can draw on more extensive funding resources than loosely knit hacker communities, enabling them to hire expert hacker talent or bribe insiders to gain access to more sensitive systems.