The NITRD Program is authorized by Congress through the High-Performance Computing Act of 1991, the Next Generation Internet Research Act of 1998, and the America COMPETES Act of 2007. The NITRD Program is a multiagency coordination program that seeks to ensure continued U.S. technological leadership and accelerate deployment of advanced and experimental information technologies. Subcommittee members include representatives from 18 federal agencies or components, including the National Science Foundation (NSF), DOD, NSA, and National Institute of Standards and Technology (NIST).

The NITRD agencies work together in eight major research areas — called Program Component Areas (PCAs). In each PCA, agency program managers participate in an Interagency Working Group (IWG) or Coordinating Group (CG) that coordinates R&D activities and preparation of the annual Supplement to the President’s Budget for the NITRD Program.

The NITRD Program activities are also described under a set of:

Figure 1 illustrates the organizational structure of the NITRD Program. 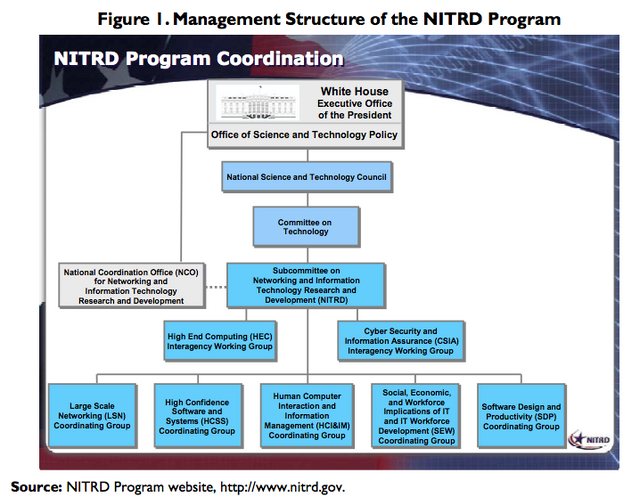