The IT Law Wiki
Register
Don't have an account?
Sign In
Advertisement
in: Government entity, Data, Preservation

The NARA is responsible for federal records disposition. Disposition is a comprehensive term that includes both destruction and transfer of federal records to the National Archives of the United States.

NARA is also responsible for preserving access to government documents and other records of historical significance and overseeing records management throughout the federal government. NARA relies on the use of information systems to receive, process, store, and track government records. 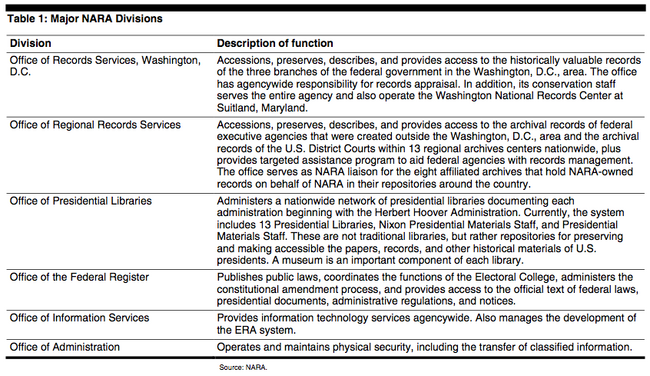 Archivist of the United States[]

The Archivist of the United States is NARA's chief administrator.

NARA has preserved electronic records since the 1970s, but is faced with bringing in a vastly greater volume of digital material. The agency has been working on a system since 1998 to address this challenge. In 2001, the NARA responded to the challenge of preserving, managing, and providing access to electronic records by initiating the development of the Electronic Records Archives (ERA). The ERA will enable NARA to improve its services to other federal agencies, researchers and teachers.

In 2005, the agency entered into a multi-million dollar contract with a vendor to build the ERA system.[1]

NARA depends on a number of key information systems to conduct its daily business functions and support its mission. These systems include networks, telecommunications, and specific applications. Table 2 lists examples of key NARA systems. 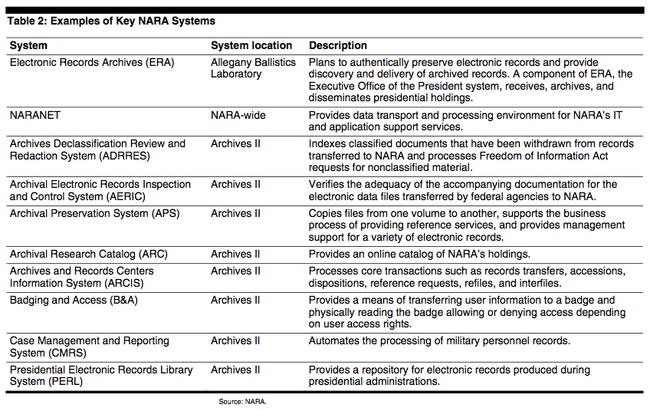 As the nation's record keeper, NARA is responsible for significant amounts of sensitive information. In 2009 NARA experienced a data breach wherein a hard drive containing data from the Clinton Administration was lost. The hard drive reportedly contained classified information and Social Security numbers of former White House staffers and visitors.