The IT Law Wiki
Register
Don't have an account?
Sign In
Advertisement
in: Technology, Definition, Data, Geospatial

A geographical information system (GIS) is

"The use of GIS [grew] dramatically in the 1980s in the government, as well as in the research and private sectors. The explosive growth in GIS was stimulated by many factors, including advances in computer graphics and data base management technology, the increased sophistication of GIS applications, the increased accuracy of spatial data achieved through the use of the Department of Defense's Navistar Global Positioning System, the ability to incorporate satellite images, and the advent of inexpensive, microcomputer-based GIS applications. More importantly, complex environmental concerns, growing regulatory pressures, the need to better manage scarce resources, and more public participation in environmental decisions are leading policymakers to use GIS as a tool for modeling policy scenarios and understanding complex geographic problems."[4]

The power of a GIS comes from the ability to relate different information in a spatial context and to reach a conclusion about this relationship. A GIS combines the disciplines of geography, cartography, computer science, and mathematics to permit users to query and analyze the attributes of any entity or phenomenon that has been identified by its geographic location, providing a powerful ability to integrate different kinds of location-based information.

A variety of platforms support GIS processing, ranging from large mainframe computers and minicomputers to scientific workstations and personal computers. In many cases, hardware used to support other applications (e.g., payroll, accounting, and digital image processing) can also be used.

A variety of technologies, including remote sensing systems and the Global Positioning System (GPS), are used to collect the geospatial information in a GIS.

"The primary function of a GIS is to link multiple sets of geospatial data and display the combined information as maps with many different layers of information. Assuming that all of the information is at the same scale and has been formatted according to the same standards, users can potentially overlay spatial information about any number of specific topics to examine how the layers interrelate."[5]

Each layer of a GIS map represents a particular “theme” or feature, and one layer could be derived from a data source completely different from the others. For example, one theme could represent all of the streets in a specific area. Another theme could correspond to all of the buildings in the same area, and others could show vegetation or water resources. As long as standard processes and formats have been used to facilitate integration, each of these themes could be based on data originally collected and maintained by a separate organization. Analyzing this layered information as an integrated whole can significantly aid decision makers in considering complex choices, such as where to locate a new department of motor vehicles building to best serve the greatest number of citizens. 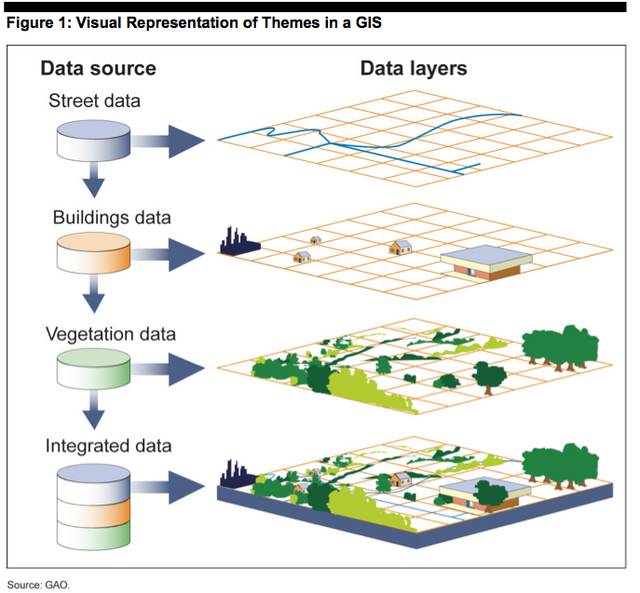