Freedom of information laws provide the legislative direction to ensure a healthy transparency in government operations.

The Australian Freedom of Information Act 1982 (FOI Act) provides a legally enforceable right of access to government documents. It applies to Australian Government ministers and most agencies, although the obligations of agencies and ministers are different.

Most Australian Government agencies are subject to the FOI Act, and must release documents in response to an FOI request unless there is an overriding reason not to do so. Some agencies, such as intelligence agencies, are exempt from the FOI Act altogether. Others, such as some courts and tribunals, are exempt in relation to certain documents.

Ministers are subject only to requests for "official documents of a minister." This means documents relating to their role as a ministers, and not personal or party political documents, or documents about their electoral affairs. Ministers are also not subject to some of the proactive publication requirements the FOI Act places on agencies.

British Columbia’s Freedom of Information and Protection of Privacy Act (FIPPA) came into force on October 4, 1993.

The Freedom of Information Act 2000 received Royal Assent on November 30, 2000, and came fully into force on January 1, 2005. It provides clear statutory rights for any member of the public to apply for access to information held by bodies across the public sector, together with a strong enforcement regime.

The main features of the Act are:

The legislation applies to a wide range of public authorities, including Parliament, Government Departments and local authorities, health trusts, doctors' surgeries, publicly funded museums and thousands of other organizations in England, Northern Ireland and Wales. Scotland has a specific Freedom of Information (Scotland) Act 2002.

Initially enacted in 1966, after 11 years of investigation, legislative development, and deliberation in the House and half as many years of such consideration in the Senate, and subsequently amended, the Act displaced the ineffective public information section of the Administrative Procedure Act.

Often referred to as the embodiment of “the people’s right to know” about the activities and operations of government, the Act statutorily established a premise of presumptive public access to information held by the federal departments and agencies.[1] The Act was designed to enable any person — individual or corporate, regardless of nationality — to request, without explanation or justification, presumptive access to existing, identifiable, unpublished, executive branch agency records on any topic.

Not supported as legislation or enthusiastically received as law by the executive branch, the FOIA was subsequently amended and modified by congressional legislation, including the Privacy Act of 1974, the Electronic Freedom of Information Act of 1996,[2] and the OPEN Government Act of 2007.

FOIA provides the public with access to information from Federal agencies (but not Congress or Federal courts) either through “affirmative agency disclosure” — publishing information in the Federal Register or on the Internet or making it available in reading rooms — or in response to public requests for disclosure. Public requests for disclosure of records are the best known type of FOIA disclosure. Any member of the public may request access to information held by federal agencies without showing a need or reason for seeking the information.

The statute has become a somewhat popular tool of inquiry and information gathering for various quarters of American society — the press, business, scholars, attorneys, consumers, and environmentalists, among others — as well as some foreign interests. The response to an FOIA request may involve a few sheets of paper, several linear feet of records, or perhaps information in an electronic format.

Agencies are required to meet certain time frames for making key determinations: whether to comply with requests (20 business days from receipt of the request); responses to appeals of adverse determinations (20 business days from filing of the appeal); and whether to provide expedited processing of FOIA requests (10 calendar days from receipt of the request). Congress did not establish a statutory deadline for making releasable records available, but instead required agencies to make them available promptly.

Although the specific details of processes for handling FOIA requests vary among agencies, the major steps in handling a request are similar across the government. Agencies receive requests, usually in writing (although they may accept requests by telephone or electronically), which can come from any organization or member of the public. Once received, the request goes through several phases, which include initial processing, searching for and retrieving responsive records, preparing responsive records for release, approving the release of the records, and releasing the records to the requester. Figure 1 is an overview of the process, from the receipt of a request to the release of records. 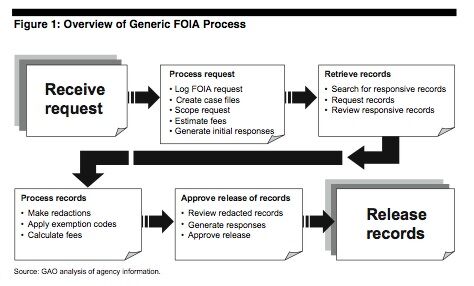 During the initial processing phase, an FOIA request is logged into the agency's FOIA system, and a case file is started. The request is then reviewed to determine its scope, estimate fees, and provide an initial response to the requester (in general, this simply acknowledges receipt of the request). After this point, the FOIA staff begins its search to retrieve responsive records. This step may include searching for records from multiple locations and program offices. After potentially responsive records are located, the documents are reviewed to ensure that they are within the scope of the request.

Specific details of agency processes for handling requests vary, depending on the agency’s organizational structure and the complexity of the requests received. While some agencies centralize processing in one main office, other agencies have separate FOIA offices for each agency component and field office. Agencies also vary in how they allow requests to be made. Depending on the agency, requesters can submit requests by telephone, fax, letter, or e-mail or through the Internet. In addition, agencies may process requests in two ways, known as “multitrack” and “single track.”

Agencies can also process FOIA requests on an expedited basis when a requester has shown a compelling need for the information.

As agencies process FOIA requests, they generally place them in one of four possible disposition categories: grants, partial grants, denials, and “not disclosed for other reasons.” These categories are defined as follows: 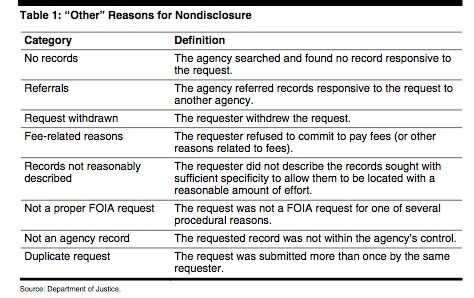 FOIA requests are processed with a presumption of disclosure. When an FOIA request is denied in full or in part or the requested records are not disclosed for other reasons, the requester is entitled to be told the reason for the denial, to appeal the denial, and to challenge it in court. When an FOIA request is denied, agencies will be defended by the Attorney General "only if (1) the agency reasonably foresees that disclosure would harm an interest protected by one of the statutory exemptions, or (2) disclosure is prohibited by law."[3]

Nine categories of information are exempted from FOIA requests. They are:

(1) information properly classified for national defense or foreign policy purposes as secret under criteria established by an executive order;
(2) information relating solely to agency internal personnel rules and practices;
(3) data specifically excepted from disclosure by a statute which either requires that matters be withheld in a non-discretionary manner or which establishes particular criteria for withholding or refers to particular types of matters to be withheld;
(4) trade secrets and commercial or financial information obtained from a person and privileged or confidential;
(5) inter- or intra-agency memoranda or letters that would not be available by law except to an agency in litigation;
(6) personnel, medical, or similar files the disclosure of which would constitute an unwarranted invasion of personal privacy;
(7) certain kinds of investigatory records compiled for law enforcement purposes;
(8) certain information relating to the regulation of financial institutions; and
(9) geological and geophysical information and data, including maps, concerning wells.

Some of these exemptions, such as the one concerning trade secrets and commercial or financial information, have undergone considerable judicial interpretation.[4]

Agencies within the federal intelligence community are prohibited from making any record available to a foreign government or a representative of same pursuant to an FOIA request.

A person denied access to requested information, in whole or in part, may make an administrative appeal to the head of the agency for reconsideration. After this step, an appeal for further consideration of access to denied information may be made in federal district court.[5]

Agencies responding to FOIA requests are permitted by the statute to charge fees for certain activities — records search, duplication, and review — depending upon the type of requester, such as a commercial user; an educational or noncommercial scientific institution, whose purpose is scholarly or scientific research; a news media representative; or the general public. However, requested records may be furnished by an agency without any charge or at a reduced cost, according to the law, “if disclosure of the information is in the public interest because it is likely to contribute significantly to public understanding of the operations or activities of the government and is not primarily in the commercial interest of the requester.”[6]

Sharing of cybersecurity information between the federal government and non-federal entities is widely considered to be an essential need, especially with respect to the protection of critical infrastructure (CI). However, attempts to encourage the private sector to share sensitive CI information with the federal government have, at times, been met with concerns that such records could be subject to public release under FOIA, resulting in potential economic or other harm to the source.

Among the nine exemptions that permit agencies to withhold applicable records are three that may particularly apply to cybersecurity information:

An example of Exemption 3 statute is Section 214 of the Homeland Security Act of 2002, which exempts information about the security of critical infrastructure and protected systems that is voluntarily submitted to an agency covered under the Act, provided that the entity that supplies the information expressly requests the exemption concurrently.

Despite these existing protections, some private-sector entities may still have concerns about public release of sensitive records — that existing laws may not be specific enough to protect particular types of records, or they may be too narrow to protect all records of concern. The White House's Complete Cybersecurity Proposal would have addressed such concerns by applying Exemption 3 to any lawfully obtained information provided to DHS for cybersecurity purposes. The Recommendations of the House Republican Cybersecurity Task Force also suggests that a FOIA exemption may be needed,[9] Adding such broad exemptions to the FOIA, however, could nevertheless prompt concerns about decreases in federal transparency.