The DHS Privacy Office was created in response to the Homeland Security Act of 2002.[1] The first Chief Privacy Officer was appointed in April 2003. It was the first statutorily mandated privacy office in the federal government.

Its mission is to minimize the impact on an individual's privacy, particularly an individual's personal information and dignity, while achieving the Department's mission to protect the homeland. The DHS Chief Privacy Officer reports directly to the Secretary of the Department, and the Office's mission and authority are founded upon the responsibilities set forth in the Homeland Security Act of 2002.[2]

The Privacy Office serves to implement Section 222 of the Homeland Security Act of 2002,[3] and has programmatic responsibilities involving the Privacy Act of 1974, the Freedom of Information Act ("FOIA"),[4] the privacy provisions of the E-Government Act of 2002, and the numerous laws, Executive Orders, court decisions and Departmental policies that protect the collection, use, and disclosure of personal and Departmental information are all followed.

Section 222 of the Homeland Security Act of 2002 calls on the Chief Privacy Officer to assume primary responsibility for privacy policy within the Department, as well as "assuring that the use of technologies sustain, and do not erode, privacy protections relating to the use, collection, and disclosure of personal information."[5] The Chief Privacy Officer is also responsible for “assuring that personal information contained in Privacy Act systems of records is handled in full compliance with fair information practices as set out in the Privacy Act of 1974.”[6]

The mission of the Office is to preserve and enhance privacy protections for all individuals, to promote transparency of DHS operations, and to serve as a leader in the federal privacy community. The Office accomplishes its mission by focusing on by several core activities: 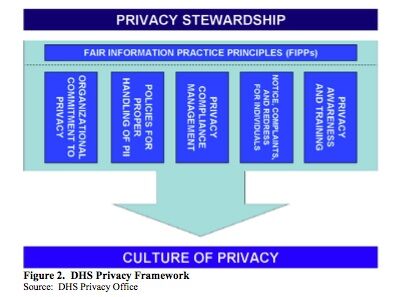 Also part of the privacy framework are five functional areas that promote a culture of privacy and compliance with legal requirements.

In addition to the responsibilities described above, the authorities and responsibilities of the Chief Privacy Officer are further amended by the Implementing Recommendations of the 9/11 Commission Act of 2007 ("9/11 Commission Act"),[9] passed on August 3, 2007. Section 802 of the Act codified authority of the Chief Privacy Officer to investigate and or report on DHS programs and operations with respect to privacy, while creating additional obligations to coordinate investigations of violations or abuse related to privacy with the DHS Office of Inspector General (OIG). This investigatory authority now expressly includes: access to all records, reports, audits, reviews, documents, papers, recommendations, and other materials available to the Department that relate to privacy within the programs and operations; the power to issue subpoenas to any person other than a Federal agency, with the approval of the Secretary; and the ability to administer oaths, affirmations, or affidavits necessary to investigate or report on matters relating to responsibilities under Section 222 of the Homeland Security Act of 2002.

The Privacy Office is structured into two functional units: the DHS Privacy Compliance Group and the DHS Departmental Disclosure and FOIA Group. The Privacy Compliance unit manages and formulates the above statutory and policy-based responsibilities, in a collaborative environment with each component and program, to ensure that all privacy issues are provided the appropriate level of review and expertise. The Departmental Disclosure and FOIA unit assures consistent and appropriate Department-wide statutory compliance with the Freedom of Information Act of 1966 (FOIA), as amended,[10] and requests made under the Privacy Act.

The Privacy Office's privacy compliance policies and procedures are based on a set of eight fair information practice principles (FIPPs) that are rooted in the tenets of the Privacy Act and govern the appropriate use of personally identifiable information (PII). DHS uses the FIPPs to enhance privacy protections by assessing the nature and purpose of all PII collected to fulfill DHS’s mission to preserve, protect, and secure the homeland.[11] DHS’s implementation of the FIPPs is described below:

These principles are also reflected in agency SORNs, which are issued pursuant to the Privacy Act of 1974 and published in the Federal Register.

The positioning of the Privacy Office within DHS differs from the approach used for privacy offices in other countries, such as Canada and the European Union, where privacy offices are independent entities with investigatory powers. Canada’s Privacy Commissioner, for example, reports to the Canadian House of Commons and Senate and has the power to summon witnesses and subpoena documents. In contrast, the DHS privacy officer position was established by the Homeland Security Act of 2002 as an internal component of DHS. As a part of the DHS organizational structure, the DHS Chief Privacy Officer has the ability to serve as a consultant on privacy issues to other departmental entities that may not have adequate expertise on privacy issues.