Origin of the term[]

The term cyberspace (also spelled cyber-space) was coined by science fiction author William Gibson in a short story Burning Chrome, and later used in his novel Neuromancer (1984). It refers to the virtual world created within a computer and the network to which it is attached (also called a "computer-generated reality"). It includes the internal computer memory and wiring, and the networks to which the computer is connected. He called cyberspace a "consensual hallucination":

The prefix "cyber" is derived from the Greek word kybernan, which means to steer or control.

Online systems, for example, create a cyberspace within which people can communicate with one another (via e-mail), do research or simply window shop. Like physical space, cyberspace contains objects (files, e-mail messages, graphics, etc.) and different modes of transportation and delivery. Unlike real space, though exploring cyberspace does not require any physical movement other than pressing keys on a keyboard or moving a mouse.

Some programs, particularly virtual worlds, are designed to create a special form of cyberspace, one that resembles physical reality in some ways but defies it in others. Users are presented with visual, auditory, and even tactile feedback that makes cyberspace feel real.

The National Military Strategy for Cyberspace Operations identifies the following characteristics of cyberspace:

"Cyberspace is both a physical and virtual domain. The physical part is the millions of networked information and communication technologies that create and enable it: computers, servers, routers, processors, satellites, switches, and cables. The virtual part is formed by electronic connections and by the data sent between and stored in the pieces of its physical infrastructure. It exists globally, created and transmitted, stored and maintained by governments, public and private owners. Cyberspace changes and evolves as people develop new hardware and software technology. It is pervasive, transcending organizational boundaries and geopolitical borders and readily accessible to almost anyone from almost anywhere in the world."[18]

Cyberspace is a defining feature of modern life. Individuals and communities worldwide connect, socialize, and organize themselves in and through cyberspace. From 2000 to 2010, global Internet usage increased from 360 million to over 2 billion people. As Internet usage continues to expand, cyberspace will become increasingly woven into the fabric of everyday life across the globe.

U.S. and international businesses trade goods and services in cyberspace, moving assets across the globe in seconds. In addition to facilitating trade in other sectors, cyberspace is itself a key sector of the global economy. Cyberspace has become an incubator for new forms of entrepreneurship, advances in technology, the spread of free speech, and new social networks that drive our economy and reflect our principles. The security and effective operation of U.S. critical infrastructure — including energy, banking and finance, transportation, communication, and the Defense Industrial Base — rely on cyberspace, industrial control systems, and information technology that may be vulnerable to disruption or exploitation.

"Figure 1 demonstrates one way of visualizing the complexity of cyberspace. It separates cyberspace into three layers: the physical layer (i.e. hardware such as submarine and ethernet cables, routers and switching devices), the logical layer (i.e. software or lines of code that allows the hardware to function and communicate), and the social layer (or the cyber-persona layer) (i.e. interaction between online personas that represent people or, increasingly, machines). These three layers are fundamental to the core functions of cyberspace, and they are continuing to grow in diversity, richness and complexity."[19] 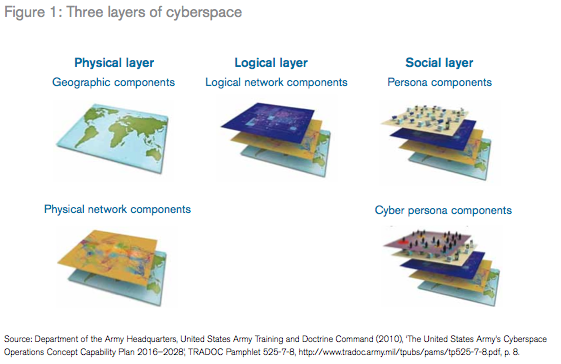