The IT Law Wiki
Register
Don't have an account?
Sign In
Advertisement
in: Cybercrime, Technology, Internet,
and 2 more

The term cybercrime describes both:

Computers and other advanced technologies may be components of cybercrime through a variety of roles:

Computers significantly multiply the criminal's power and reach in committing such crimes.

Cybercrime also includes attacks against computers to deliberately disrupt processing, or may include espionage to make unauthorized copies of classified data. These attacks have such colorful names as:

Cybercrime techniques have characteristics that can vastly enhance the reach and impact of criminal activity, such as the following: 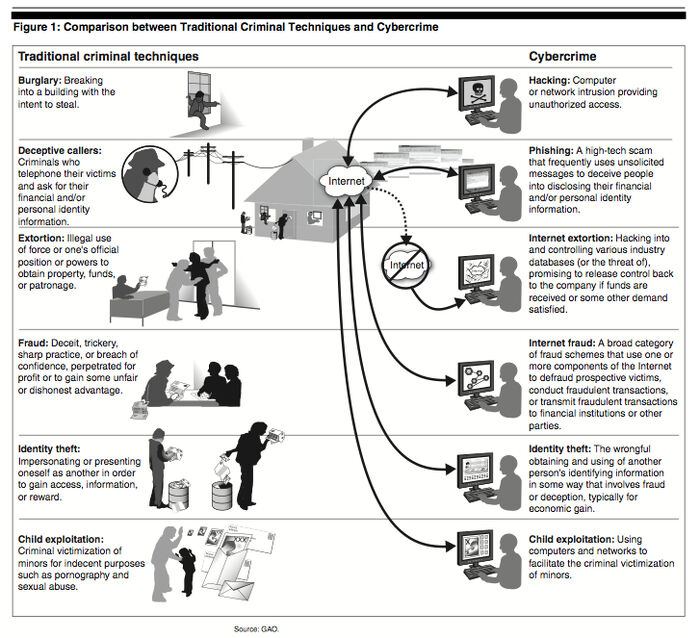 "There are direct and indirect costs to cybercrime victims including:

The actual costs of cybercrime at the systemic level encompass the:

The complexity, sophistication and impact of cybercrime evolves as technology evolves, making it difficult to track the technological advancements of cyber criminals. Furthermore, the complexity and sophistication of malware used for cybercrime now rivals the capabilities of some state-sponsored adversaries."[8]

If a terrorist group were to launch a cyberattack to cause harm, such an act also fits within the definition of a cybercrime. The primary difference between a cyberattack to commit a crime or to commit terror is found in the intent of the attacker, and it is possible for actions under both labels to overlap.

Often it is very difficult to determine if a cyberattack or intrusion is the work of a terrorist organization with the objective of doing harm, or a cybercriminal who wishes to steal information for purposes of monetary gain. Just as terrorists and violent extremists often rely on exploiting vulnerabilities of targets seen as soft and easy to access to support possible future cyberattacks, cybercriminals exploit these same vulnerabilities to gain access to information that may lead to monetary gain.

The proportion of cybercrime that can be directly or indirectly attributed to terrorists is difficult to determine. However, linkages do exist between terrorist groups and criminals that allow terror networks to expand internationally through leveraging the computer resources, money laundering activities, or transit routes operated by criminals.

Implementation of a stronger policy for domestic physical security has reduced the risk to some targets that may have previously been vulnerable to physical attacks. Also, it is suggested by numerous experts that terrorists may be enhancing their computer skills or forming alliances with cybercriminals that possess a high-level of telecommunications expertise. In addition, continuing publicity about Internet security vulnerabilities may encourage terrorists' interest in attempting a possible computer network attack, or cyberattack, against U.S. critical infrastructure.

Cybercrime is a threat to worldwide economic and security interests. Various studies and expert opinion estimate the direct economic impact from cybercrime to be in the billions of dollars annually. One estimate has placed the annual cost of cybercrime to adults in 24 countries across the globe at $388 billion.[9]

Numerous public and private entities (federal agencies, state and local law enforcement, industry, and academia) have individual and collaborative responsibilities to protect against, detect, investigate, and prosecute cybercrime. The Departments of Justice (DOJ), Homeland Security (DHS), and Defense (DOD), and the Federal Trade Commission (FTC) have prominent roles in addressing cybercrime within the federal government.

State and local law enforcement organizations also have key responsibilities in addressing cybercrime. Private entities — Internet service providers, security vendors, software developers, and computer forensics vendors — focus on developing and implementing technology systems to protect against computer intrusions, Internet fraud, and spam and, if a crime does occur, detecting it and gathering evidence for an investigation.

In addition, numerous partnerships have been established between public sector entities, between public and private sector entities, and internationally to address various aspects of cybercrime. For example, the Cyber Initiative and Resource Fusion Unit is a partnership established among federal law enforcement, academia, and industry to analyze cybercrime and determine its origin and how to fight it.

Entities face a number of key challenges in addressing cybercrime, including reporting cybercrime and ensuring that there are adequate analytical capabilities to support law enforcement (see table below). While public and private entities, partnerships, and tasks forces have initiated efforts to address these challenges, federal agencies can take additional action to help ensure adequate law enforcement capabilities.

Cybercrime laws vary across the international community. Australia enacted its Cybercrime Act 2001 to address this type of crime in a manner similar to the U.S. Computer Fraud and Abuse Act. In addition, Japan enacted the Unauthorized Computer Access Law of 1999 to cover certain basic areas similar to those addressed by the U.S. federal cybercrime legislation.

Council of Europe Convention on Cybercrime[]

Because political or natural boundaries are not an obstacle to conducting cybercrime, international agreements are essential to fighting cybercrime.

On November 23, 2001, the United States and 29 other countries signed the Council of Europe's Convention on Cybercrime as a multilateral instrument to address the problems posed by criminal activity on computer networks.

The Convention on Cybercrime distinguishes between four different types of offences:

Nations supporting this Convention agree to have criminal laws within their own nation to address cybercrime, such as hacking, spreading viruses or worms, and similar unauthorized access to, interference with, or damage to computer systems. It also enables international cooperation in combating crimes such as child sexual exploitation, organized crime, and terrorism through provisions to obtain and share electronic evidence. The U.S. Senate ratified this convention in August 2006.