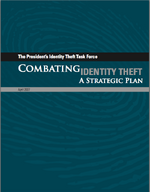 This report documents the President's Task Force on Identity Theft’s efforts to implement the Strategic Plan’s recommendations. The report indicates that the Task Force successfully carried out most of the recommendations or is making substantial progress in doing so.

The report made recommendations in four primary areas:

Through the Identity Theft Enforcement and Restitution Act of 2008 (Title II of Pub. L. No. 110-326), Congress responded to the Task Force’s recommendation that criminal restitution statutes allow victims to be compensated for their time in recovering from the actual or attempted identity theft.

Congress has already taken steps to address some of these Task Force recommendations. Through the Identity Theft Enforcement and Restitution Act of 2008, Congress, among other things, eliminated provisions in the U.S. Code requiring the illegal conduct to involve interstate or foreign communication, eliminated provisions requiring that damage to a victim’s computer amass to $5,000, and expanded the definition of cyber-extortion.

The Task Force's guidance was distributed in a September 2006 memorandum from the Office of Management and Budget to the heads of federal agencies and departments.[1] In May 2007, the Office of Management and Budget issued a memorandum that updated the September 2006 guidance and, among other things, required agencies to develop and implement data breach notification policies within 120 days.[2]