The IT Law Wiki
Register
Don't have an account?
Sign In
Advertisement
in: Technology, Telecommunications, Broadband, Definition

The term broadband refers to advanced communications systems capable of providing high-speed transmission of services such as data, voice, video, complex graphics, and other data-rich information over the Internet and other networks.[1]

Broadband enables consumers to receive information much faster than a dial-up connection and provides an “always-on” connection to the Internet.[2] Consumers can receive a broadband connection through a variety of technologies. Broadband speeds vary significantly depending on the particular type and level of service ordered and may range from as low as 200 kilobits per second (kbps), or 200,000 bits per second, to six megabits per second (Mbps), or 6,000,000 bits per second. Some recent offerings even include 50 to 100 Mbps. Broadband services for residential consumers typically provide faster downstream speeds (from the Internet to the subscriber's computer) than upstream speeds (from the subscriber's computer to the Internet).

Transmission is provided by a wide range of technologies, including digital subscriber line and fiber optic cable, coaxial cable, wireless technology, and satellite. Broadband platforms make possible the convergence of voice, video, and data services onto a single network.

Broadband itself is a leading indicator of the major transitions in communications technology and services provided by incumbents and new entrants into virtually every segment of the communications industry. No longer is broadband simply another service — it is a growing platform over which the consumer accesses a multitude of services, including voice, data, and video in an integrated way across applications and providers.

There are multiple transmission media or technologies that can be used to provide broadband access. These include

Cable and DSL are currently the most widely used technologies for providing broadband access. Both require the modification of existing physical infrastructure already connected to the home (i.e., cable television and telephone lines). Each technology has its respective advantages and disadvantages, and competes with each other based on performance, price, quality of service, geography, user friendliness, and other factors.

By using a broadband, high-speed Internet connection, users can view video, make telephone calls, or download software and other data-rich files in a matter of seconds. In addition to offering speed, broadband access provides a continuous always-on connection (no need to "dial-up") and a "two-way" capability — that is, the ability to both receive (download) and transmit (upload) data at high speeds.

Wireless is a unique broadband solution for several reasons. These include providing both mobility and portability, efficiently connecting devices within short distances, and bridging longer distances more efficiently than wireline and cable technologies. This combination of mobility and portability can make broadband access both seamless and ubiquitous. Just as wireless voice technologies have enabled consumers to move through their daily lives without having to worry about how and where to make a call, wireless broadband technologies can free consumers from having to think through when or where or how they will get access to information and entertainment. Wireless technologies also can be more efficient for communicating between short hops (e.g., Wi-Fi, home wireless networks).

Congress recognized the importance of broadband in Section 706 of the Telecommunications Act of 1996, which directs the FCC to “encourage the deployment on a reasonable and timely basis of advanced telecommunications capability to all Americans.” Under this authority, the FCC has to date established a minimal regulatory environment for broadband Internet access services. In the past, the FCC has stated that less regulation has encouraged providers to invest in broadband infrastructure. The Communications Act of 1934, as amended, allows the FCC to classify services as "telecommunications services" or "information services," the latter being subject to fewer regulatory restrictions.

The FCC, through a number of proceedings, has classified broadband Internet access (regardless of the platform) as an information service.[4] The FCC does not have explicit statutory authority to regulate the provision of information services; however, the FCC has the authority to impose regulations under what is termed its ancillary jurisdiction to regulate services that are reasonably related to its existing statutory authority.[5] The FCC also has the authority to adopt broadband regulations to ensure that broadband providers are capable of providing authorized surveillance to law enforcement agencies.[6]

Some policymakers, believing that disparities in broadband access across American society could have adverse economic and social consequences on those left behind, assert that the federal government should play a more active role to avoid a “digital divide” in broadband access. One approach is for the federal government to provide financial assistance to support broadband deployment in underserved areas. Others, however, question the reality of the “digital divide,” and argue that federal intervention in the broadband marketplace would be premature and, in some cases, counterproductive.

Evolution of broadband in the United States[]

Prior to the late 1990s, American homes accessed the Internet at maximum speeds of 56 kilobits per second by dialing up an Internet Service Provider (such as AOL) over the same copper telephone line used for traditional voice service. A relatively small number of businesses and institutions used broadband or high speed connections through the installation of special “dedicated lines” typically provided by their local telephone company. 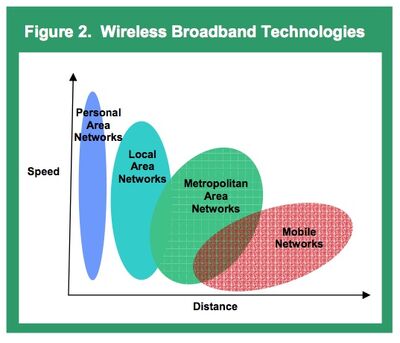 Starting in the late 1990s, cable television companies began offering cable modem broadband service to homes and businesses. This was accompanied by telephone companies beginning to offer DSL (digital subscriber line) service (broadband over existing copper telephone wireline). Growth of high-speed lines[7] has been steep, rising from 2.8 million high speed lines as of December 1999, to 113 million lines as of June 30, 2009.[8] Of the 113 million high-speed lines reported by the FCC, 93.9 million serve residential users.[9] Since the initial deployment of residential broadband in the United States, the primary residential broadband technologies deployed continue to be cable modem and DSL.[10]

A distinction is often made between “current generation” and “next generation” broadband (commonly referred to as next-generation networks or NGN). “Current generation” typically refers to currently deployed cable, DSL, and many wireless systems, while “next generation” refers to dramatically faster download and upload speeds offered by fiber technologies and also potentially by future generations of cable, DSL, and wireless technologies. In general, the greater the download and upload speeds offered by a broadband connection, the more sophisticated (and potentially valuable) the application that is enabled.

A December 2008 survey from the Pew Internet and American Life Project found that 57% of Americans have broadband at home.[11] By April 2009, home broadband adoption increased to 63% of adult Americans.[12] Broadband usage by demographic group is set forth in the following table.

Consumer choice among broadband providers, however, remains limited as more than 80% of consumers have a choice of only one or two providers. Moreover, urban and suburban[15] consumers typically have more choice than rural consumers. In those areas with greater choice,[16] prices for broadband service are lower. A recent survey found that of the 15% of consumers reporting that they have four or more broadband Internet access choices at home, they paid approximately 18% less than the average monthly bill.[17]

Currently, relatively large market shares for fixed, wireline broadband services are typically held by a single incumbent cable operator and a single incumbent telephone company in each geographic area and relatively large market shares for mobile broadband services held by the four largest wireless carriers. Nonetheless, a variety of other technologies are beginning to compete in[18] that market. The narrowband, dial-up Internet access services introduced in the mid-1990s have[19] largely been supplanted by much faster broadband connections, as consumers have demanded faster access to increasingly sophisticated and data-rich content and applications.

According to Pew, non-broadband users tend to be older, have lower incomes, have trouble using technology, and may not see the relevance of using the Internet to their lives. Between 2007 and 2008, low income Americans (under $20,000 annual income) and African Americans showed no significant growth in home broadband adoption after strong growth in previous years.[21] Pew also found that about one-third of adults without broadband cite price and availability as the reasons why they don’t have broadband in their homes, while two-thirds cite reasons such as usability and relevance.[22]

Broadband speeds (and prices) are important factors that can determine which technologies are deployed, which applications will be enabled, and how widespread deployment will be. Table 1 shows different broadband speed ranges and the applications they make possible. 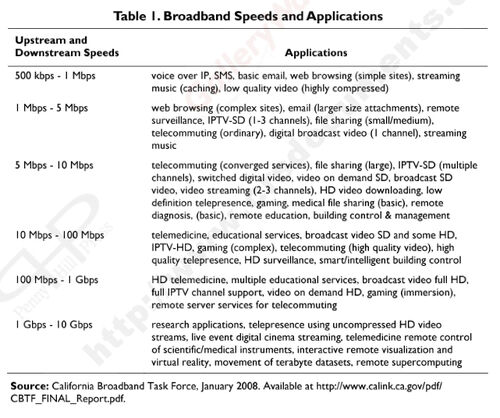 The FCC’s fifth and latest “706 report,” which is prepared pursuant to section 706 of the Telecommunications Act of 1996 to periodically determine whether broadband is being deployed in a reasonable and timely fashion, found that, “In the future, we anticipate ever-greater demand for services and applications requiring greater bandwidth over an ever-expanding area.”[23]

Subsequently, as increasingly sophisticated and innovative applications become enabled, the impacts on consumers, the economy, and society become potentially more profound and far-reaching.

Because of relatively low population density, topographical barriers, and greater geographical distances, broadband service may be more difficult to obtain in some rural areas. Particularly for wireline broadband technologies — such as cable modem and DSL — the greater the geographical distances among customers, the larger the cost to serve those customers. The terrain of rural areas can also be a hindrance to broadband deployment because it is more expensive to deploy broadband technologies in a mountainous or heavily forested area. An additional added cost factor for remote areas can be the expense of “backhaul” (e.g., the “middle mile”) which refers to the installation of a dedicated line which transmits a signal to and from an Internet backbone which is typically located in or near an urban area. Thus, there is often less incentive for companies to invest in broadband in rural areas than, for example, in an urban area where there is more demand (more customers with perhaps higher incomes) and less cost to wire the market area.

Some policymakers believe that disparities in broadband access across American society could have adverse consequences on those left behind, and that advanced telecommunications applications critical for businesses and consumers to engage in e-commerce are increasingly dependent on high-speed broadband connections to the Internet. Thus, some say, communities and individuals without access to broadband could be at risk to the extent that connectivity becomes a critical factor in determining future economic development and prosperity.

In attempting to address these challenges, some rural communities have found it helpful to develop a strategic plan for broadband deployment that includes creating a comprehensive business proposal to broadband providers. Such a plan, for example, could demonstrate to broadband providers that deployment is a sound business decision that would benefit both the providers and the community. This strategic planning process may include, but is not limited to, the following elements and strategies: