The backbone (also referred to as the Internet backbone)

The first Internet backbone was implemented in the United States by the National Science Foundation in 1986.

A backbone generally has greater data-carrying capacity, or "bandwidth," than the networks connected to it. The Internet backbone is the interconnection of high-speed networks, primarily government, commercial telecommunications and academic networks that route data for public Internet users.

The hierarchical structure of physical links, roughly speaking, runs from "backbone" networks to "regional" networks to "local" networks. The Internet backbone consists of many different networks. Usually, the term is used to describe large networks that interconnect with each other and may have individual ISPs as clients. For example, a local ISP may provide service for a single town, and connect to a regional provider which has several local ISPs as clients. This regional provider connects to one of the backbone networks, which provides nationwide or worldwide connections.

"Much of the terrestrial fiber optic backbone in the United States has been constructed along public rights of way created for railroad, telephone, and electric-utility owned companies. Providers have created additional backbone capacity in the form of undersea cables and satellite systems."[5] 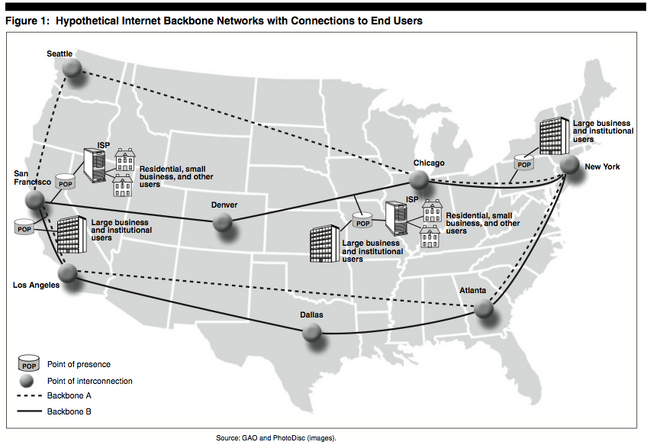